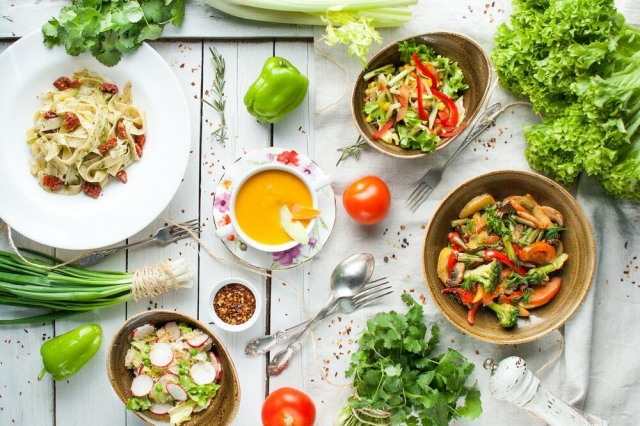 Despite the misconception that those who follow a vegan diet severely restrict their meat, eggs, and dairy intake, vegans have several excellent plant-based protein options that are equally as nutritious as their animal-based counterparts.

A diet high in fruits, vegetables, whole grains, legumes, and nuts, with limited quantities of processed or fast food, can be healthy, protein-rich, reasonably priced, and even an enjoyable and diverse diet to stick to. So, let’s debunk some common myths regarding vegan diets.

About 1% of calcium is found in blood, muscles, and tissue, but most of the body’s calcium is stored in bones. According to NIH (National Institutes of Health), the average dietary allowance ranges from 1,000 to 1,200 mg daily for healthy adults and older individuals.

While it might be challenging to maintain the recommended calcium intake on a vegan diet, it is not impossible. Selecting high-calcium foods is crucial and focusing on calcium-rich meals that the body can readily absorb is also essential.

Some of the best plant-based and easily-absorbed sources of calcium include leafy vegetables, such as kale, broccoli, and cabbages. These foods are richer in calcium than dairy products, with the added benefits of diverse minerals and fibers.

Despite being commonly touted in carnivore diet circles, meat is not the sole source of iron. In a survey conducted by the Australian Bureau of Statistics, 31% of iron sources were from cereal and whole grain products, while meat and poultry accounted for only 17%.

Unlike meats, plant-based foods with iron contain “non-heme iron,” which is more difficult to absorb than meat’s “heme iron.” However, recent studies show that plant-based diets can be richer in iron due to a dependence on vegetables, whole grains, nuts, seeds, and legumes.

Vegan-related iron deficiency is only a myth, as people following a vegan diet are no more at risk of iron deficiency than those on a carnivore diet. In fact, people dependent on plant-based iron sources store less iron in their bodies, thus reducing the risk of heart disease and diabetes.

Although the concern for protein intake is reasonable and completely justified, there is a common misconception that vegan diets are severely protein-restricted due to the exclusion of meat, milk, and eggs.

Despite consuming less meat, vegans have a higher protein intake than those following a traditional meat diet since vegans consume plant-based foods that are high in proteins, such as legumes, tofu, Lentils, nuts, and seeds.

According to the study, vegetarian diets only pose a modest risk of insufficient protein intake, which is further reduced by consuming various plant protein sources such as beans, nut butter, peas, and lentils. In addition, Superfood Green Powders like spirulina and chlorella can also complement a healthy protein-balanced diet with the added benefits of vitamins and antioxidants.

Many assume that vegans often lack muscle density, thus always feeling fatigued and exhausted due to the limited protein intake. However, this could not be further from the truth, as some world-class athletes are vegan!

For example, Venus Williams, a famous American tennis player, has followed a vegan diet for over a decade since being diagnosed with Sjogren’s Syndrome, an auto-immune disorder manifesting in fatigue and joint pain.

Williams has discussed the positive impact of plant-based foods on her health and performance while helping to manage her medical condition. In an article on The Beet blog, she states that she has “never felt better,” saying that her diet “gives me the energy to perform my best throughout the day and keeps me feeling at the top of my game because I make healthier choices all around.”

Myth 5: Hard to Maintain an Only Plant-Based Diet

Following a plant-based diet can seem daunting for any beginner, especially if meat has been a staple throughout their lives. There even seems to be an invisible understanding among people that maintaining a strict plant-based diet is a conscious daily effort.

Full commitment to a vegan diet is understandably difficult, so take it one step at a time by slowly introducing meatless options such as potatoes, eggplant, black beans, walnuts, and oats.

Ultimately, going vegan is not a set of defined rules; it depends on the person’s health status and concerns. Thanks to a diverse community, meal planning can be extremely diverse as there are wide-ranging plant-based recipes.

Myth 6: Not a budget-friendly diet

One might think that diverse grocery options incur additional costs and that it is expensive to maintain a vegan diet. However, an Oxford University study about whole foods found that vegan diets were more affordable and cost-effective as they reduced food expenses by up to one-third.

Grains, beans, seeds, and legumes are a few examples of staple yet incredibly affordable vegan options that can accommodate any lifestyle.

In addition, there is no need for daily grocery shopping. It is possible to buy in bulk and stock up on frozen foods such as berries, peas, and corn which can be as nutritious as fresh food.

Myth 7: Vegan Diet is Not Satisfying or Boring

Contrary to common belief, vegan diets are not salad-based only and do not leave you hungry by the end of the meal. Plant-based diets are not about restriction or exclusion of ‘fun’ and guilty pleasure foods such as pizza or burgers.

Vegan diets offer the merit of experimentation. Mainly, a vegan diet is all about making healthy food swaps. For example, swap out the meat and cheese with your favorite vegetables and tofu; pizza can still be delicious and tasty.

For burgers, throw some chickpeas and sweetcorn into the food processor to replace meat. Then, add tomato slices and lettuce for a vegan burger that is just as savory as a classic burger but healthier and with less saturated fat.

Despite the surrounding myths and misconceptions, following a plant-based diet can be a health-conscious choice, considering the diversity of plant-based food options. Ultimately, maintaining a healthy and nutritious diet should depend on each individual’s intended goals and health concerns.